Vaping has grown in popularity over the years and is done with the use of e-cigarettes. E-cigarettes were first introduced as an alternate nicotine delivery device in 2007 in the United States. Today, e-cigarettes are sold online and in stores, with a global market worth approximately $6 billion.

Vaping is the inhalation and exhalation of vapor produced by products used in an electronic cigarette (e-cigarette). E-cigarettes heat the liquid/ cartridges to produce an aerosol that the user inhales into his or her lungs. The cartridges that are vaporized often contains nicotine (impacts addiction), tetrahydrocannabinol (THC), cannabinoid oils (CBD) and other additives. The e-cigarettes are available in hundreds of different flavors, many shapes and sizes to include those that look like regular cigarettes, pens, USB flash drives and everyday items.

It is reported that e-cigarettes are marketed as a smoking cessation product. No government agency has endorsed this claim. The World Health Organization (WHO), stated that due to inconclusive evidence, it is not concluded that vaping aids in smoking cessation. Additionally, there are claims of vaping being a safer alternative to smoking due to e-cigarettes exposing users to less harmful chemicals than burned cigarettes. However, Centers for Disease Control and Prevention (CDC) states that “the use of any tobacco product, including e-cigarettes, is unsafe for young people.”

What are the Experts Saying?

There are many unknowns of the chemicals that are included in vaping products, and this unknown brings uncertainty of the long-term effects of vaping in the coming years. According to the United States Food and Drug Administration (FDA), due to the unknown risks and benefits, the use of e-cigarettes remains controversial. Currently, due to vaping-related illnesses and deaths, organizations such as the CDC, are urging individuals to refrain from vaping while investigations are conducted to determine the cause of incidences and to determine the safety of the various substances used in vaping products.

As of November 5, 2019, the CDC reported 2051 cases of lung-related illnesses (163 more than the previous week), as well as 39 confirmed deaths. The exact cause of the illnesses and deaths are unknown, but the common factor in all the reported cases is vaping.
Some symptoms associated with vaping includes:

It has become a major concern of the increase statistics of teens who vape. It is reported that e-cigarettes are marketed to attract non-smokers and teenagers, primarily through the flavored options of the liquid products that are used in the e-cigarettes. Flavors such as bubblegum, vanilla, strawberry among others, makes the product more tolerable and enjoyable. Nicotine is found in most e-cigarettes and with the added flavors, makes vaping much more addicting. The impact of nicotine can be harmful on brain development which continues up to age 25 years. According to the CDC, 24 years is the median age of vapors, with a reported age range between the ages of 13 and 75 years. A National Youth Tobacco Study conducted by the American Cancer Society, reported that more than 3.6 million middle and high school students vape.

Due to increase in vaping related illnesses and deaths many concerns have been raised including the lack of regulations regarding vaping. In a peer reviewed article titled “450 Vaping-related Illnesses, 5 Deaths: No You Don’t Know What’s in Your Vape,” the author stated that in August 2019, Michigan became the first state to ban flavored-e-cigarette liquids and products. Additionally, he stated that the FDA gave a deadline of May 2020 for e-cigarette manufacturers to submit their product for FDA review (Fratantoro, 2019). Additionally, more states such as: New York, Massachusetts, Rhode Island, Montana, Washington, Oregon and California, have implemented ban on sale of vaping products due to the increase in vaping related illnesses and deaths.

CDC recommends:
• Do not use e-cigarettes or vaping products containing THC
• Do not modify or add any substances to vaping products
• E-cigarettes or vaping products should not be used by youths, young adults and women who are pregnant.
• Adults addicted to nicotine who currently vape, should weigh all the risks and benefits and consider using FDA approved nicotine replacement therapies: Over the counter (patch, gum, lozenge), Prescription (inhaler, nasal spray).
• If you continue to vape, carefully monitor yourself for symptoms and seek medical attention immediately if severe symptoms occur.

Organizations such as the American Medical Association (AMA) recommends that until health officials can investigate and pinpoint the cause of vaping-related illnesses and deaths, “all Americans should avoid using vapes.” 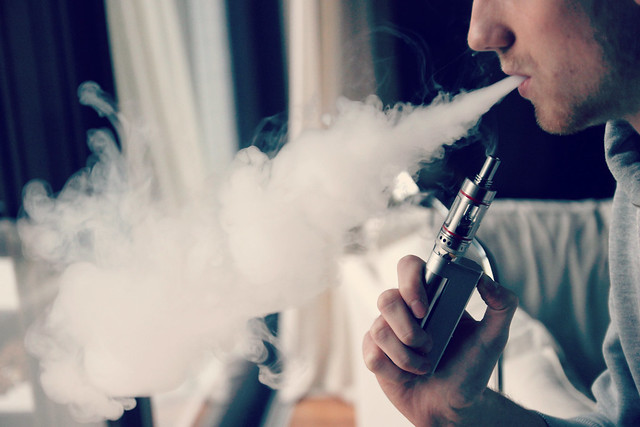 This is just a test